The start of 2013 found a decidedly different and more positive public discourse on immigration policy reform than any time in recent memory. Though far from unified, politicians on both sides of the aisle as well as pundits across the political spectrum had begun calling for commonsense reform, which frequently included a pathway to citizenship. Media coverage also began to change, in ways that could both help and hamper effective policy change. In order to understand the nature and implications of that change, The Opportunity Agenda analyzed mainstream newspaper and TV coverage of immigration policy during a six-month period, from September 2012 through February 2013. Major events during that period included the presidential election, the Republican leadership’s public shift toward support for immigration policy reform, an announcement of a bipartisan U.S. Senate framework for reform, President Obama’s immigration address from Las Vegas, and, lastly, the State of the Union address on February 12, 2013.1 A detailed description of methodology appears in the appendix.

We analyzed trends in narrative, opinion, spokespeople, and use of terminology related to immigrants and immigration contained in news reporting, opinion articles, and talk shows. Our findings are described in this report, along with recommended strategies for pro-immigrant advocates, policymakers, and other spokespeople, to leverage openings and overcome challenges in coverage in order to influence public discourse toward lasting positive change.

Soon upon the completion of this media audit, two significant developments unfolded. On April 2nd, The Associated Press changed its stylebook to ban the use of the term “illegal immigrant,” and on April 17th a bipartisan group of U.S. Senators introduced a bill to overhaul current immigration laws.

The main themes and narratives that we identified were:

Figures 1 and 2: Words most commonly Found in mainstream newspaper coverage (left) and television coverage (right) about immigration policy From September 2012 to February 2013.

Discussions of politics before the election consisted primarily of speculation about Latino voters’ presidential choices and the Republican Party’s electoral strategy regarding this community. Following the election, these conversations gave way to a discussion about the Republicans’ disconnect with the Latino community—which, according to some, cost them the 2012 election— and the shift of high-profile elected officials and other conservative figures from opposition to advocacy for comprehensive immigration policy reform.

A Paucity of Enforcement Stories

Modest Decline in Use of “Illegal”

The term “illegal immigrant” continues to be used extensively in news coverage, as compared to the use of other terms such as “undocumented,” “unauthorized,” “without papers,” “new Americans,” or “aspiring citizens.” Within the sample, the term “illegal immigrant” was used about 2.5 times more often than “undocumented.” The ratio of “illegal” to “undocumented” was greatest in print coverage (2.6:1) and less pronounced on television (1.7:1). The alternative terms “unauthorized,” “without papers,” “new Americans,” or “aspiring citizens” did not appear in coverage we analyzed, except for one mention each of “without papers” and “unauthorized.”

We also measured how frequently in TV and print coverage in the last three years different terms were used to describe the legal status of undocumented immigrants. Overall, there is a trend toward a decrease in usage of the terms “illegal immigrant” and “illegal alien.” The use of “undocumented” and similar phrases, such as unauthorized, actually increased between 2010 and February 2013,19 becoming a stronger competitor to the term “illegal.”

The vast majority of articles we reviewed that used “undocumented” in the main narrative (other than any quoted copy), used the term interchangeably with “illegal” rather than in lieu of it. We did not identify any newspaper that completely refrained from using “illegal,” though some articles did so. In none of the newspapers studies, moreover, did “undocumented” appear more frequently than “illegal.”

The term “illegal alien” appeared only in Fox News transcripts and in one article describing conservative views on immigration. This finding is consistent with trends identified by six years of analysis of immigration media coverage by The Opportunity Agenda, which show that the use of this phrase has almost disappeared from mainstream print and TV discourse—with the exception of Fox News. 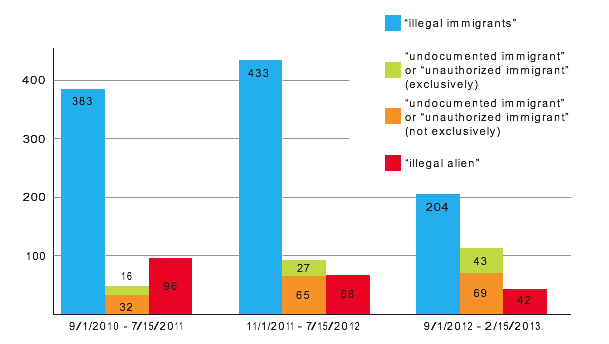 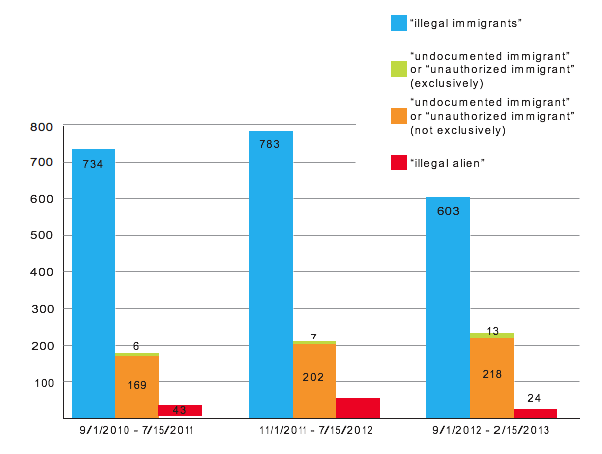 The Opportunity Agenda conducted an audit of immigration coverage by 53 major national and regional daily newspapers and eight national broadcast and cable television networks. We reviewed coverage from September 1, 2012 to February 15, 2013 using LexisNexis’ news aggregator service, Nexis. (Full list of outlets follows.) The audit pulled every news story, transcript, editorial, op-ed, and letter to the editor that included the word “immigrant” or “immigration” and the word “policy.” We found over a thousand articles and a thousand transcripts, of which we randomly selected and analyzed 50 articles and 30 transcripts. The analysis of TV coverage was based on transcripts only and therefore did not consider imagery, intonation, or nonverbal cues.

Print sources come from the newspapers with the top 50 circulation according to the Editor & Publisher Yearbook.

The Atlanta Journal-Constitution The Baltimore Sun

The Journal of Commerce

1. On the day of the release of this report, April 17, 2013, a bipartisan group of U.S. Senators introduced a bill to overhaul current immigration laws.

2. DACA allows certain younger undocumented students or graduates to apply for deferrals on their immigration status, without granting them new status.

3. The DREAM Act (Development, Relief, and Education for Alien Minors) was a bipartisan bill that would have allowed  young immigrants who arrived in the U.S. before they were sixteen to achieve permanent residency through completion of high school or college entry.

13. The “Secure Communities” program, which was introduced in March 2008 pursuant to federal law. It’s a federal enforcement program in which the U.S. Immigration and Customs Enforcement uses state and local law enforcement agencies’ resources to enforce federal immigration laws. Under the program, biometric data (e.g., fingerprints) collected from individuals arrested and transmitted by such law enforcement agencies to the FBI are automatically shared with Department of Homeland Security (DHS), and this data is used by ICE to request that local law enforcement detain the individual until ICE comes to take him/her into its custody.

17. The TRUST Act would have restricted California’s cooperation in the Secure Communities program. The bill was passed by California’s legislature but vetoed by Governor Jerry  Brown.

19. The Associated Press changed its stylebook entry on the term “illegal immigrant” on April 2, 2013, after this media audit was conducted. The entry now reads “except in direct quotes essential to the story, use illegal only to refer to an action, not a person: illegal immigration, but not illegal immigrant.”

The Case of the Cultural Influencers: Colin Kaepernick, Jimmy Kimmel, and #MeToo

In recent years, the power of popular entertainment to inspire large audiences and shift cultural norms has become a topic of growing interest in the social advocacy space.

Power of POP is a media analysis of representation of immigrants in popular tv shows.

Coverage of Arizona v. United States, a Challenge to the Constitutionality of Arizona’s SB 1070

Have a media interview? Writing an opinion piece? We can help.

Use our interactive Value, Problem, Solution, Action (VPSA) message building tool to create a message that will energize your base and expand your constituencies.