The United States is one of the richest and most powerful nations in the world. Known around the globe as a land of opportunity, the promise of economic security and mobility has long been among America’s hallmarks. Yet in 2013, 46.5 million Americans—15 percent of our population—lived in poverty. Twenty million people, one-third of them children, lived in deep poverty, meaning their income was less than  half of the poverty rate. This reality comes in the wake of a historic recession, a high-profile movement focused on inequality (Occupy Wall Street), and an ongoing political debate over safety net programs  and the role of government. In this volatile environment, the way in which the news media cover poverty and poor people can tell us much about the nation’s priorities and its collective resolve to take action.

This analysis examines mainstream media coverage of poverty, poor people, and poverty-related issues during three time periods: August–October 2009, August–October 2011, and August–October 2013. Based on this representative sample, our inquiry seeks answers to several questions: What were the most frequent topics covered in articles, broadcasts, and blogs about poverty and people who are poor, and did those topics change over time? Whose voices were elevated as sources for quotes in articles or as guests on television programs, and what messages did they communicate? What overarching story is the media telling about poverty in America today? And does that story help or hinder the mobilization of public opinion in support of anti-poverty policies that can bring about real and lasting change?

Studies confirm what has long been evident to those working in the anti-poverty arena: the mainstream media’s coverage of poverty and the lives of people living in poverty is sparse. Lack of media coverage leads to invisibility, which results in a low level of public concern. The Pew Research Center’s Project for Excellence in Journalism conducts an ongoing weekly quantitative analysis of reporting by 48 outlets from five sectors of the media: network television news, newspapers, online news sites, cable news, and radio news.2 The center’s News Coverage Index shows that from 2007 through the first half of 2012, during which the official number of people living in poverty increased by more than 9 million people (from 37.3 million to 46.5 million), poverty coverage accounted for less than 1 percent of the “news hole” (the percent of newspaper or broadcast space that can be devoted to news as opposed to advertising). “It’s fair to say,” said project Associate Director Mark Jurkowitz, “that when you look at that particular topic [the coverage of poverty], it’s negligible.”3

While events occasionally cause blips of increased media coverage, they do not necessarily translate into the kind of sustained coverage necessary to bring about heightened awareness and political will. The spike in coverage of poverty issues after Hurricane Katrina in 2005 lasted barely a month, according to an analysis by Fairness & Accuracy in Reporting (FAIR).4 Much more recently, but outside of the time period covered by our analysis, the 50th anniversary of the start of the War on Poverty generated a significant increase in news and commentary. Whether that will lead to an increase in coverage over time is an open question. The chart below suggests that coverage of poverty has been increasing gradually since 2010, no doubt reflecting the media’s growing interest in the effects of the Great Recession on the economy as a whole. Yet coverage today is still below the high point in 2006.

First some definitional explanations: when used by the media, the term “poverty rate” refers  to  the official rate established annually by the Census Bureau. It is based on the number of people living below an income “threshold,” which is in turn based on the size of a family and its number of related children under the age of eighteen. In 2012, the poverty threshold for a two-parent family with two children was  an annual income of $23,283. The definitions of other terms commonly used by the media, such as “the poor,”“low-income,” and “working poor,” are much more fluid. “Newly poor” is a more recent addition  to the lexicon and refers to individuals or families who have fallen below the poverty threshold since the beginning of the Great Recession. “Deep poverty” describes people having incomes of less than half the poverty level. The U.S. Census Bureau estimates that 6.6 percent of the population—more than 20 million adults and children—experience deep poverty today.5 Unlike “situational poverty,” which is caused by a specific event such as divorce or loss of a job and is usually temporary, “intergenerational poverty” is the state of generations of a family being impoverished. Studies focusing on the intergenerational continuation of poverty find that while individuals can break out of intergenerational cycles of poverty, they are less likely to do so than is commonly thought.6

During the time span covered by this media analysis, from 2009 to 2013, the poverty rate rose and then stabilized at 15 percent, 2.5 percentage points higher than in 2007, the year before the Great Recession began.

In 2012 the poverty rate among children under eighteen was 21.1 percent. The poverty rate for whites was 9.7 percent in 2012, compared to 27.2 for blacks, 11.7 percent for Asian Americans, and 25.6 percent for Hispanics. Numerically, those percentages translate into 31 million whites, 10.9 million blacks, 1.9 million Asian Americans, and 13.6 million Hispanics. The poverty rate for the foreign-born is higher than for the native-born (19.2 percent compared to 14.3 percent).7 Of the 20 million deeply poor, one-third are children under age 18, and blacks and Hispanics account for half of all deeply poor people. Three-quarters of the adults in this category have not worked in the past year, and more than two-fifths live in single-parent families, most of which are headed by mothers. The incidence of deep poverty is much higher in cities and rural areas than in suburban communities, and more than one-third of all deeply poor people live in central cities.8

This media analysis is based on an examination of the content of 16 mainstream newspapers, including 11 of the largest national papers and five regional outlets; transcripts of public affairs programs from seven network and cable outlets; and posts from three right-leaning and three left-leaning blogs.

Using the Nexis service database for print and broadcast media and the Radian6 database for blogs, we entered the following search terms: “poverty” AND (“poor families” OR “poor people” OR “low- income families”). Our search terms were deliberately broad in order to capture a wide range of stories dealing with poverty.

The time span for the search covers August 1 through October 30 during three different years: 2009, 2011, and 2013. We looked at three different years in order to gauge how the stories and media narratives about poverty were trending over time. Because the volume of coverage of poverty-related stories has been relatively low, as noted above, we selected August, September, and October of each year in order to generate a large enough sample. During those months, two annual events occur that typically generate stories about poverty and the government’s safety net: the Congressional budget debate takes place every summer in anticipation of the beginning of the federal government’s new fiscal year in October, and the government releases the Census Bureau’s report, “Income, Poverty and Health Insurance Coverage.”

The searches produced a pool of hundreds of print articles, broadcast transcripts, and blog postings, from which a sample was drawn by applying a random sequence generator to ensure a representative sample. The final sample contained 70 newspaper articles, 32 television transcripts, and 18 blog posts, for a total of 120 items.

The newspapers, television outlets, and blogs included in the analysis were: 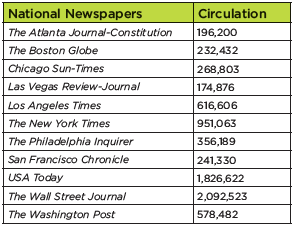 It is important to note some of the limitations of this research. The Nexis database of articles and transcripts does not deliver images, so we are not able to comment on how people living in poverty are visually depicted in photographs or broadcasts. We did not include local print or broadcast media in our scan, nor did we include how poverty is depicted by the entertainment media. We did, however, conduct an analysis of how poverty is being discussed in social media; those findings appear on page III-8.

3 Dan Froomkin, “It Can’t Happen Here: Why is There So Little Coverage of Americans Who Are Struggling with Poverty?”, Nieman Reports, Winter 2013. See also Mariana Garces and Steve Randall, “Media Not Concerned About the Very Poor,” FAIR EXTRA!, September 1, 2012; Neil deMause and Steve Randall, “The Poor Will Always Be With Us—Just Not on the TV News,” FAIR EXTRA!, September 1, 2007; Neil deMause, “Katrina’s Vanishing Victims: Media Forget the ‘Rediscovered’ Poor,” FAIR EXTRA!, August 1, 2006.

Have a media interview? Writing an opinion piece? We can help.

Use our interactive Value, Problem, Solution, Action (VPSA) message building tool to create a message that will energize your base and expand your constituencies.